I started training in martial arts 59 years ago, but wasn’t saved until ten years later. After joining Judo and Karate for Christ I worked with a youth pastor and students in our singles group to do martial arts demonstrations for the purpose of presenting the Gospel of Christ. The idea for Grace Martial Arts was born 28 years later in 1990.

We started the online version of Grace Martial Arts in 1995 for the purpose of connecting with other Christian martial artists and instructors. We met Grand Master Robert Xavier in 1997 and started Grace Martial Arts Fellowship together. His Christian martial arts program in the Bradenton and Sarasota area began 40 years ago and continues to touch the lives of hundreds of families.

We were also blessed to be involved in the re-start of Judo and Karate for Christ in 1998 with a new name – Karate For Christ International. What a joy to see how that ministry has grown to touch thousands of young people around the world.

We were living in Columbus, Georgia in the late 90’s and taught privately and at a local YMCA. We also had the privilege of doing demonstrations at many area events.

We moved to Tampa in 2002 and our first students were from several area YMCA’s and homeschool programs along with private classes. Thanks to the leadership of Seminole Heights Baptist Church we began meeting in the church’s fellowship hall on Monday nights in 2004. Grace Martial Arts also became part of Mission Tampa. That program continued until we moved to Alabama in 2014. Some of those Tampa students continued meeting at a church in Lutz on Monday nights and we’ve been working with Black Belt instructors to teach the students online since then.

I am so thankful to the many men and women, boys and girls, who have been part of Grace Martial Arts for the past 30 years. The commitment of hundreds of people and families has made the ministry a wonderful outreach into many communities. We are also thankful to the many men, women and teens who earned Black Belts with us and helped teach the GMA classes. That commitment continues to this day.

The idea of martial arts as a ministry caught the attention of the community through the years and several newspapers and TV stations covered our Grace Martial Arts program. Here’s one article from January 2007 – My God Has Kung-Fu Grip. 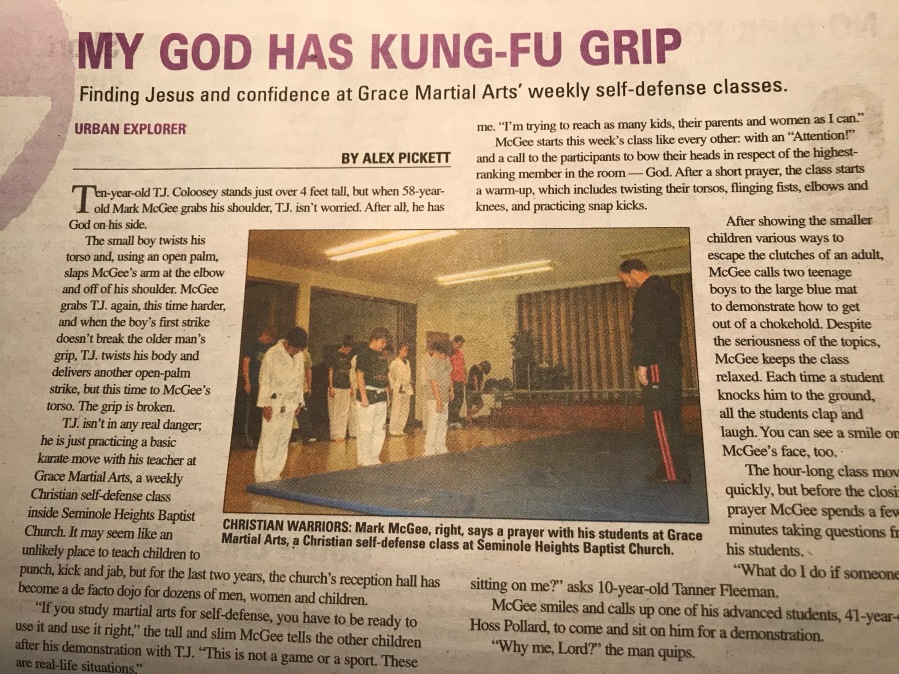 We thank you for your interest in Grace Martial Arts. May God bless you and your family richly is our prayer.