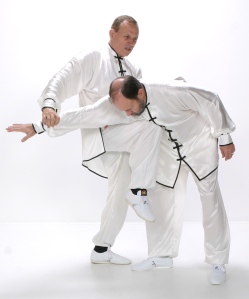 We now move to the fourth “stance” in Christian Martial Arts – “be strong” (κραταιουσθε). The word “strong” comes from the Greek word kratos, which means “strength, force, might.” Krataiousthe carries the idea of “prevailing” by a strength other than your own. That strength is God’s. We prevail through the power of Jesus Christ.

How do martial artists gain strength to prevail in training and self defense? Through weeks, months and years of building internal and external strength. Martial artists combine good nutrition and rest with the right kind of exercise to develop bodies and minds that can endure the kind of intense training that it takes to excel in the art of self defense.

When I became a student of Shotokan Karate as a teenager, I was introduced to the teachings of Meijin (Master) Gichin Funakoshi. Funakoshi was a school teacher on the Island of Okinawa and an expert in Karate, having been the student of Masters Azato Yasutsune and Ankō Itosu. Funakoshi died in 1957, just a few years before I began my study of Japanese martial arts. He was the Founder of Shotokan Karate and introduced the art of Karate to the Japanese mainland. Many martial artists call him the Father of Modern Karate.

I was very interested in learning about Funakoshi and his training methods on the Island of Okinawa. It was different than my training as a young karateka. Training in the United States in the early 1960s was legal and available to anyone at almost anytime of the day or night. Funakoshi did not have that freedom.

“At that time the practice of karate was banned by the government, so sessions had to take place in secret, and pupils were strictly forbidden by their teachers to discuss with anyone the fact that they were learning the art … It was after a couple years’ practice that I realized my health had improved tremendously, and that I was no longer the frail child I had been. I enjoyed karate but–more than that–I felt deeply indebted to the art for my increased well-being … Night after night, often in the backyard of the Azato house as the master looked on, I would practice a kata (“formal exercise”) time and again, week after week, sometimes month after month, until I had mastered it to my teacher’s satisfaction. This constant repetition of a single kata was grueling, often exasperating and on occasion humiliating. More than once I had to lick the dust on the floor of the dojo or in the Azato backyard. But practice was strict, and I was never permitted to move on to another kata until Azato was convinced that I had satisfactorily understood the one I had been working on.” Entering the Way, Gichin Funakoshi, The Overlook Martial Arts Reader, pp. 223-224, Edited by Randy F. Nelson, The Overlook Press, 1989

Most of my martial arts training was in the “external” or “hard” arts until 1997. That’s when I began learning Yon Ch’uan and Hwa Yu T’ai Chi, both “internal” or “soft” martial arts. Yon Ch’uan and Hwa Yu use strength and power differently than Karate. My teacher’s teacher, Grand Master John Chung Li, explained that the way to use internal strength was “yield to heavy attack.” 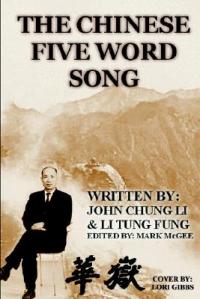 “In hard stuff, force is always used against force, but in our soft exercise we teach how to yield. Let your attacker advance as he desires. Don’t mind how he comes. Yield. Don’t be in his way. Guide him towards his desired direction. The more force with which he advances, the farther he will go where you desire. Thus causing him to lose his balance, you guide him into emptiness. When his balance is lost, you move to attack. Only a small force need be used since he is moving without control and with great force.” The Chinese Five Word Song, pp. 35-36, John Chung Li, Fifth Estate Publishing, 2004

Martial strength is more than just being able to block, punch and kick. It’s having the strength of character to use physical strength in the right way at the right time; sometimes hard, sometimes soft, always with integrity. How long will you have to train to obtain martial strength? How much time do you have?

Jesus Christ is the greatest example of Strength. He created the universe and holds all things together by His eternal power, yet He also yielded to brutal torture through crucifixion. Jesus had the power and strength to easily overwhelm His accusers and escape death on the Cross, but He demonstrated true strength by finishing the work His Heavenly Father had sent Him to accomplish. That “work” was shedding His Blood on the Cross, dying for our sins and rising from the dead.

“But now the righteousness of God apart from the law is revealed, being witnessed by the Law and the Prophets, even the righteousness of God, through faith in Jesus Christ, to all and on all who believe. For there is no difference; for all have sinned and fall short of the glory of God, being justified freely by His grace through the redemption that is in Christ Jesus, whom God set forth as a propitiation by His blood, through faith, to demonstrate His righteousness, because in His forbearance God had passed over the sins that were previously committed, to demonstrate at the present time His righteousness, that He might be just and the justifier of the one who has faith in Jesus.” Romans 3:21-26

Many people have made the mistake of viewing Christ’s sacrificial death as a sign of weakness, but look at how Jesus chose to defend those who are of the “seed of Abraham.”

“Inasmuch then as the children have partaken of flesh and blood, He Himself likewise shared in the same, that through death He might destroy him who had the power of death, that is, the devil, and release those who through fear of death were all their lifetime subject to bondage. For indeed He does not give aid to angels, but He does give aid to the seed of Abraham. Therefore, in all things He had to be made like His brethren, that He might be a merciful and faithful High Priest in things pertaining to God, to make propitiation for the sins of the people. For in that He Himself has suffered, being tempted, He is able to aid those who are tempted.” Hebrews 2:14-18

John Chung Li used to say, “suddenly revealed, suddenly concealed.” What he meant was a martial artist internalized his or her skills until necessary to reveal them externally, suddenly for self defense. As suddenly as the skills appear they are suddenly concealed, ready to use again when needed. There is no place for pride, anger or revenge in Yon Ch’uan or in life. Like Christ, God calls us to serve others in humility. That includes faith and self defense.

“Therefore if there is any consolation in Christ, if any comfort of love, if any fellowship of the Spirit, if any affection and mercy, fulfill my joy by being like-minded, having the same love, being of one accord, of one mind. Let nothing be done through selfish ambition or conceit, but in lowliness of mind let each esteem others better than himself. Let each of you look out not only for his own interests, but also for the interests of others. Let this mind be in you which was also in Christ Jesus, who, being in the form of God, did not consider it robbery to be equal with God, but made Himself of no reputation, taking the form of a bondservant, and coming in the likeness of men. And being found in appearance as a man, He humbled Himself and became obedient to the point of death, even the death of the cross. Therefore God also has highly exalted Him and given Him the name which is above every name, that at the name of Jesus every knee should bow, of those in heaven, and of those on earth, and of those under the earth, and that every tongue should confess that Jesus Christ is Lord, to the glory of God the Father.” Philipppians 2:1-11

Standing “strong” is the fourth stance in Christian martial arts. May it be our goal this week and every week to stand strong for Christ and and our service to others.