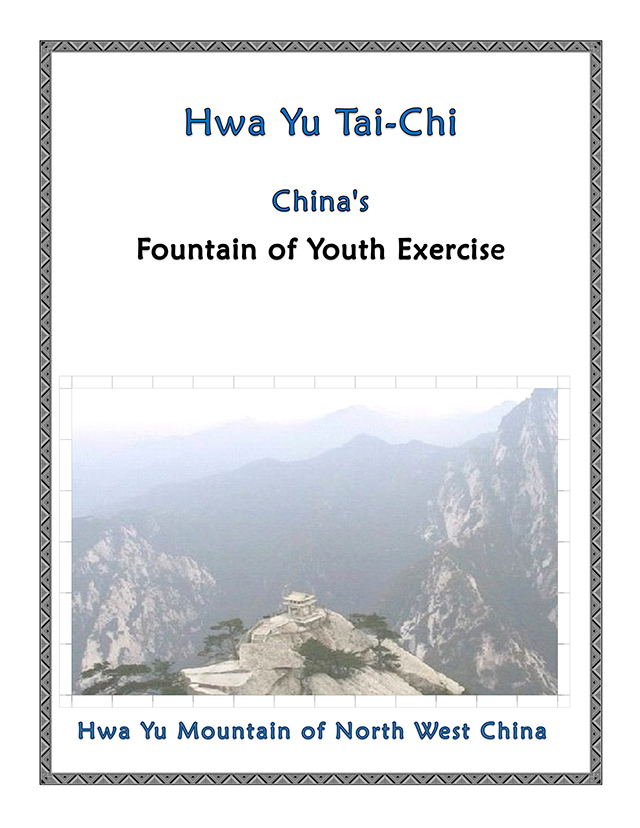 The origin of Hwa Yu T’ai Chi is traditionally believed to be in China during the 9th and 10 centuries AD. Tradition is that Chen Tuan lived on Mount Hua (Hwa) in Shensi during the latter part of the Five Dynasties period (907-960 AD) and early part of the Sung Dynasty (960–1279 AD).  The mountain is located in the north-central part of modern China in Shaanxi province about 75 miles east of Xi’an. It is the western mountain of what is known as the Five Great Mountains of China.

Chen Tuan was an expert in Chinese martial arts before he created Liu Ho Pa Fa. Tradition is that he studied martial arts at the Rock of Nine rooms on Wudang Mountain (also spelled Wu Tang).  Wudang is located in Central China about 405 miles from Mount Hua, certainly within travel distance for Chen Tuan to have trained there.

Wudang has a long history of “internal” or “soft” martial arts. Liu Ho Pa Fa (Hwa Yu T’ai Chi) is one of the internal martial arts. Other internal arts from Wudang are Hsing-I Ch’uan (Form of the Will Boxing), Pa Kua Chang (Eight Trigrams Palm) and T’ai Chi Ch’uan (Grand Supreme Boxing). It’s believed that these arts were created during the Ming Dynasty, many years after Chen Tuan created Liu Ho Pa Fa.

Some historians believe Chen Tuan taught Liu Ho Pa Fa on Mount Wudang and that he may have taught Huo Lung, who was the teacher of Chang San Feng (also spelled Zhang Sanfeng). Chang is said to be the creator of T’ai Chi and the concept of internal strength (neijia). It’s also believed Chang may have spent time on Mount Hua before finally settling in the Wudang mountains.

You can learn more about Hwa Yu T’ai Chi and its history by reading the following books:

While this lineage takes us back to the Sung Dynasty, the history of Hwa Yu T’ai Chi and Chinese Martial Arts goes back even further.

Chinese Martial Arts is thought by many to have originated with a legendary figure known as the Yellow Emperor. Huangdi (Huang – yellow .. di – emperor) is believed to have been one of ancient China’s earliest emperors. He was known as a great warrior and intellect and was given the name “Yellow Emperor.”  He is reputed to have been born on Xuanyaan Hill in Xinzheng County in the Henan Province. His birth name was Youxiong Xuanyuan and the beginning of his rule is believed to have been in the middle of the third millennium BC.

That’s interesting in light of the nations that descended from Noah. We find them listed in Genesis 10.

“Now this is the genealogy of the sons of Noah: Shem, Ham, and Japheth. And sons were born to them after the flood.” Genesis 10:1

All the peoples (nations) of the earth descended from the sons of Noah. So, which son (or sons) of Noah was an ancestor of the Chinese people? Let’s begin with the lineage of Japheth.

“The sons of Japheth were Gomer, Magog, Madai, Javan, Tubal, Meshech, and Tiras. The sons of Gomer were Ashkenaz, Riphath, and Togarmah. The sons of Javan were Elishah, Tarshish, Kittim, and Dodanim. From these the coastland peoples of the Gentiles were separated into their lands, everyone according to his language, according to their families, into their nations.” Genesis 10:2-5

Some historians believe the Chinese came from the lineage of Japheth through his son Javan and grandson Kittim. Though the Bible does not list how long Japheth and his sons and grandsons lived after the Flood, we do know how long Shem and his descendants lived.

That gives us some idea about the possible ages of the sons and grandsons of Japheth. Javan and Kittim may have lived for several hundred years after their births.

Genesis 10 informs us that “the earth was divided” during the days of Peleg. It would appear from what we read in the Bible that the division of the earth refers to the confusion of language at the Tower of Babel that we read about in Genesis 11.

The sons of Noah and their descendants who were scattered abroad over the face of all the earth would have had the time and energy to establish many cities across the world. We know from the life of one of Noah’s great-grandsons that he set up cities throughout ancient Mesopotamia.

“Cush begot Nimrod; he began to be a mighty one on the earth. He was a mighty hunter before the Lord; therefore it is said, ‘Like Nimrod the mighty hunter before the Lord.’ And the beginning of his kingdom was Babel, Erech, Accad, and Calneh, in the land of Shinar. From that land he went to Assyria and built Nineveh, Rehoboth Ir, Calah, and Resen between Nineveh and Calah (that is the principal city).” Genesis 10:8-12

Nimrod would have lived about the same time as his cousin Selah, who was born about 37 years after the Flood. If Nimrod was born about the same time and lived as long as Selah did (433 years), then Nimrod would have been living long enough after the confusion of language at the Tower of Babel to build all the cities attributed to him. He may have been stronger than members of other families since he built cities in the same area as Babel. Genesis 10 does say that Nimrod was a mighty hunter and a kingdom builder – which would possibly make him the first king after the confusion of language.

Nimrod would not have been the only person building a kingdom and cities across the world. His uncles and cousins would have also been looking for places to build their new lives after the confusion of language and many of them would establish themselves as kings and rulers in the new world.

In the next part of our special series, we will look at where the families of Japheth, Ham and Shem moved to from Babel. We’ll also see which family or families may have moved to what would become China. We’ll also see if we can determine from the Bible the identity of the Yellow Emperor.